After 20 years of building and riding triplets we've learned a lot.

A posting from Bill at Santana:

Kids love cycling. It is a rare child who would choose videos and a babysitter when they could instead be biking with their parents. Babyseats, trailers, trailabikes, child-stoker tandems and triplets make family cycling possible. Because they all work, however, does not mean they all work equally well.

Mark & Courtney at the Midwest Tandem Rally 2000 held in St. Charles, IL. There were something like 634 teams in attendance with one couple from England. Courtney was likely the youngest stoker at 2 years 10 months of age, at least so we were told!

At a '97 rally Jan and I caught up with two veteran tandeming couples---each with a 5 year old child---who were doing the ride together. Jan and I have known and ridden with both couples since before their children were born. When we came upon them they were 10 miles from the end of a 55 mile day.

We caught the family riding the tandem and trailabike team first. The boy on the trailabike was coasting. When we tried to engage him in a conversation, he backpedaled to increase the din of the freewheel. A quarter mile up the road we caught up to the triplet team. The girl on the triplet was pedaling and singing to her parents. Dad said they had been stopping over every 2-3 miles to allow their friends to catch up. Most amazing is that the triplet parents are each a dozen years older and 50 pounds heavier than the parents on the tandem when it is just these four adults on their two tandems the heavier and older team can't come close to maintaining the younger team's pace.

What do children prefer? Stoking!

When kids stoke a tandem they are a full member of the team doing exactly what they have seen their parents and other adults doing. (Name another activity where children participate as an equal). Children immediately sense that the tandem "needs" them (a tandem with an empty seat seems silly even to a 3-year- old). While adding pedals to a trailer may give children a greater sense of being a team player, it is clear to them (if not to their parents) that they are still "tagging along"---as a nonessential "fifth wheel." That they can coast while their parents pedal emphasizes the obvious disparity.

Jan and I will never forget the day we thought we rode "too far" with Pam. Five-year-old Pam had been riding "her" triplet with us for a year when we decided we were ready to ride a 25 mile round trip from home to join the L.A. Wheelmen for their medium 40 mile route through central Orange County. It was a hot day, turnout was low, and when nobody wanted to do the 40, we decided to go for the 55 miler. As we rode up our driveway late that afternoon we'd done 80 miles---all in city traffic on a hot day. Jan and I were toasted. When I opened the garage door to park the triplet Pam ran in, retrieved her 16" BMX bike, and raced off down the block to visit some friends.

When we first started experimenting with child stoker kits in the mid-'70s we played with both independent coasting and/or differentially sized chainrings to lower a child's cadence. Both features were scrapped when we learned children with scaled-down cranks can maintain 110 RPM longer than their parents. While independent coasting seemed like a necessity, the noise of the clicking drove parents crazy.

While many have questioned the stability of a triplet (or the ease of captaining one) it is easier to ride a well-designed triplet than it is to ride a tandem pulling a traditional trailer. Both options are more stable than tandeming with a trailabike. While Burley's Piccolo is a better solution than the cheaper seatpost-mounted trailabikes, a child who doesn't lean with the team will negatively affect handling. Because the child's center-of-gravity is behind the rear axle with either a trailabike or a traditional over-the-rear- wheel childseat, children in either of these positions can destabilize a bike far more easily than a child riding in a normal stoking position.

For the past half-dozen years we've been watching a growing trend where parents buy the triplet soon after their child is born.

Step one (family cycling with a weeks-old infant): A rear-facing automobile infant child seat is firmly affixed between the center seatpost and handlebars. Dad controls the bike while mom stokes and entertains the infant. This is safer, more comfortable and faster than a tandem and child trailer.

Step two (family cycling with a two year old): The triplet is equipped with both an over-the-rear-wheel childseat and a central child stoker setup with 3-4" crankarms. Both positions feature a harness. Because mom is behind and watching, children can safely stoke a triplet 12 months before they can be trusted to stoke a tandem (at 24 months of age instead 36). Because nap times come frequently, when they get tired a young child is simply rotated to the child seat.

Step three (family cycling with a four year old): By the time they reach the age of four, the child's crankarms can be lengthened by an inch, the harness can be removed and the unused childseat can be jettisoned. 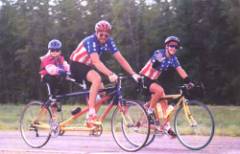 The triplet sold & our new one was on the way!

Step four (family cycling with an eight year old): Triplet owners will all remember the day their child "graduates" to the rear seat and uses crank shorteners and pedal blocks instead of the child stoker kit. When the child is no longer between them, the parents regain the expected intimacy of tandeming. 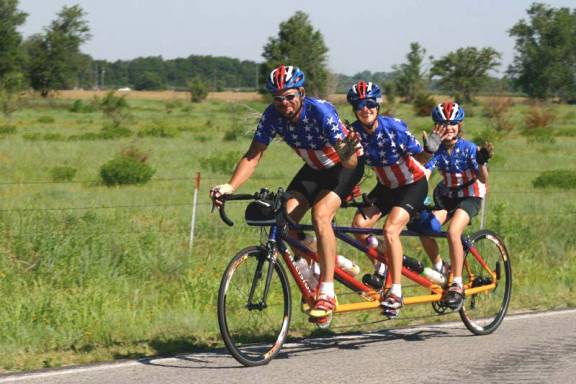 Step five (family cycling with a young adult): A few years after the crank shorteners have been discarded a typical child will seek an independent identity independent from their parents. While some will move on to riding a single bike, most will find non-cycling friends who will invite them to do something else whenever mom and dad plan a ride. Still, because a child on a triplet isn't forced to entertain a parent as much as a child on a tandem, children will continue tandeming a little bit longer on a bike with three seats.

In the meantime, by the age a young adult develops the skill to find an invitation to a non-riding activity, parents will have no trouble recruiting another adult for a planned ride. While most families will sell a triplet after their youngest child hasn't ridden it for a year, a few families have kept the triplet for all-adult rides.

In short: While the initial cost is high, a good triplet can serve a family from the time their first child is born until their last child reaches puberty. Because a well-used Santana triplet changes hands for only $1,000 less than its original price, it is a phenomenal family investment. A triplet's per year cost is no higher than a seemingly inexpensive child trailer or trailabike. Because a normal roofrack can be modified to carry a triplet, it's quicker and easier to transport a triplet than a tandem plus a trailer. I've taken triplets on airliners nearly two dozen times---a triplet with its wheels off fits in a standard Santana shipping carton.

My advice? A triplet is your best investment in family cycling. Because the depreciation of a Santana triplet is the same with 4 or 12 years of use, buying a triplet sooner is smarter for two reasons. First, the price of new triplets continue to rise. Second, the per-year cost of triplet ownership is halved if you use it for 8 years instead of four. While buying a used triplet would seem. Any parent with adult children will confirm that children become adults far too quickly---putting off the purchase of a triplet (or child stoker tandem) "until next season" is a choice you will too soon regret. 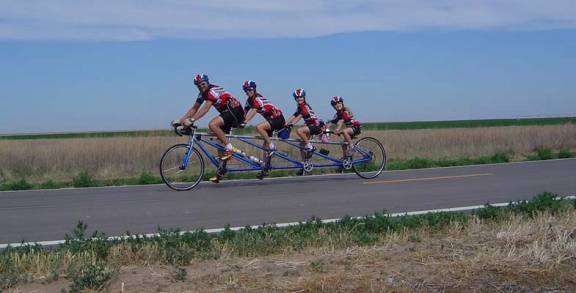