Sue and I purchased our first tandem in 1992 and shortly thereafter a friend enlightened us about the HHH in Wichita Falls, TX.  We rode the event for the first time in 1993 despite a muscle strain injury to my gluteus maximus, of all things!  I remember the ride well with the broken gear cable at the 27 mile point, the pampering we received at  the sags and the little hill that gave me something beyond a proverbial pain in the arse!  We finished in 5 hours riding time, our fastest tandem century at the time.

We enjoyed the event so much that we continued to ride it every year until 1995 when a conflict with our 1995 Paris Brest Paris event prevented us from doing so.  We returned in 1996 and 1997 and enjoyed generally faster completion times in the neighborhood of 4:30.  In 1997 we were blessed with our first pregnancy and Courtney was on the way.   The event that year was ridden in very cool weather with our ridding buddy Jay Sanders in ~ 4:00 as is related in our 'Hotter'n Hell 100 in 4 hours!'

We have always shared our experiences with others about the great sags, the pampering, the themes, and contests between the different sags.  Unfortunately Julie has yet to experience this side of the race/event as her inaugural ride in 1998 was non stop and with a 4th place tandem finish!  1999 was another scheduling conflict for us since Julie and I qualified for the 1999 Paris Brest Paris randoneering event, one we completed successfully.  Thus far we have ridden the HHH together 6 times consecutively with 4th, 3rd and 2nd place finishes, and another year was more than dismal resultant of mild carbon monoxide poisoning combined with having three flat tires!

Then we had the really bad year.  We were 1 mile from the finish and the pack was making its move on the final rise nearing an overpass.  Everyone was jittery, nervous, tired, and dehydrated.  The group started to fan out with bikes passing each other as everyone was jockeying for position waiting for someone to make a strategic move.   I was alert, keeping a sharp eye on all the wheels and just waiting for the first sign of someone touching a wheel or anything else to go wrong.  Said alertness and leaving an 'out' has allowed us to escape many crashes as others have gone down around us in other events.  There we were trying to do everything right based on my previous year's racing experience when it all went terribly wrong, something that still bugs me to this day as it ended my 100,000 mile accident free tandem record and it was the first time to hit the ground in 22 years.  We started to improve our position as we began to pass another tandem.  I was wary of the groups ever increasing width when a single bike cut in front of us without looking nor warning.  It caused us to hesitate momentarily but we were okay and at this point viewed having the accelerating rider in front of us as an advantage since he would help pull us around the tandem. 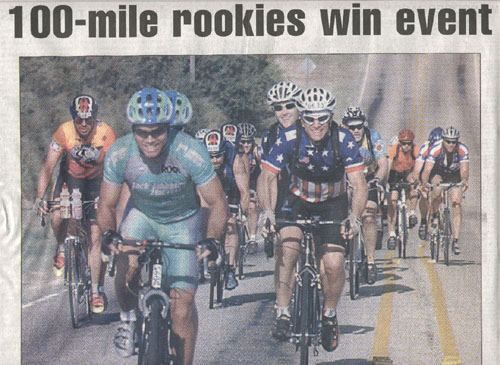 We are out of the saddle on the left in the orange jerseys climbing the feed zone hill in 2002.

I was watching the guy on the single closely (who should not have been in with the tandems in the first place) when he moved right cutting it tight in front of the other tandem.  I recall pushing real hard to accelerate on past the tandem as the coast was now clear all the while thinking that we would need our increasing momentum to be successful at catching a break should one occur or to gap the field on the overpass should it look right.

Then there was this flash as there was literally only a millisecond before we came in contact with a barrel having a pole and sign placed without warning in the middle of a four lane highway.   Hitting the sign with my helmeted head caused a dreadful sound, something verified from others in the pack later.

My body got rearranged a bit inside but surface wise I came out without a scratch.  There was not even a scratch on the bike aside from the stoker handlebar tape.  Unfortunately Julie had her hands poised out on the sides of the cow-horn bars as she was ready to stand and accelerate up the rise.  The fall with her hand position caused a skinned knuckle that required a couple of stitches which she received in short order after riding to the medical tent 1 mile away.

Going into my 10th event and her 6th, we did not have any great expectations after our previous two experiences but decided to give it one more go before doing something different such as riding a triplet or quad with the kids.

A rain storm came through Kansas City causing a great deal of flooding that finally reached Wichita Falls the night and the morning before the event.  It has never rained during my decade of HHH participation but this year was different.  The lightening and heavy downpour awakened me at 3:08 AM and it did not let up until shortly after the racers were to start.  The storm was really tapering down as the racer start time neared and it eventually turned into an on and off sprinkle causing us to consider it a go for us.

We decided to mount up after looking at the rather shabby weather channel radar as the storm had just moved off towards the east... and we were to start the ride heading west. 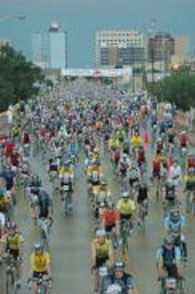 With the weather delay the racers had only a 2 minute start on us with the singles following us by another minute.  We chased down the racers in only 13 miles and enjoyed a pretty good draft from the large group.  25 miles into the ride my bladder was starting to protest and it was obvious a stop would be in order long before the finish so the decision was made to rectify said situation, much to my relief!  The pace seemed somewhat mellow when I made the decision to pull out and jam on the brakes.  We were to quickly learn that the shelter of the pack is very deceiving!  Our worries about catching back on were quickly justified.  We chased hard, real hard, giving it our all as it was a now or never situation.  I was literally laying on the handlebars with thumbs hooked on the shift cable housings exiting the Shimano STI levers to get as aero as possible.  We were up to 27 and 30 mph at times and it took about 3 miles to reel them in.  We were a bit toast after catching them but thankfully we did.  Once we literally caught our breath we wondered allowed with each other how much we were going to pay for that effort later in the ride.

The racer feed zone had an abundance of bottled water as the 65 degree start temp was now past and the mercury had come up about 10 degrees.  They could not give the water away for the first time in my memory.  We eventually  threw away two full bottles of Gatorade just to lighten the load!

As we approached the final 10 miles we were down to 4 tandems in our group along with about 30 singles that worked hard to make up that one minute on the tandems.  The equipment ridden by our tandem competitors combined with our increasing average speed indicated their owners were certainly no slouches.  We were accompanied by a carbon fiber Calfee, a titanium LiteSpeed and a Burley sporting Rolf wheels. 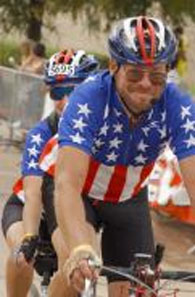 We had scouted out the finish route the previous evening and knew we would be greeted by 3 ninety degree turns followed by about 5 blocks of straight run.   Julie commented that this would be a good place for me to do 'my thing' which is sail through the turns effectively gaping the others, something we seem to have a habit of doing!

As we approached our fateful spot of two years previous, we both voiced concern about whether the barrels would again be placed in the middle of the four lane with no markings or warnings of any sort and reflected on how the HHH folks never responded to my expressed written concerns.  We watched the singles dodge the same damn barrels with near misses that literally did us in some 2 years previous.  Thankfully the group was much calmer going into the finish area this year and riders actually called out the barrels recognizing them to be a hazard, an intentionally placed hazard in the very center of the road with no element of warning.

We were approaching downtown Wichita Falls and were about 12th going into the first turn.  Being unable to get the perfect line with the bike traffic our speed dropped more than we wanted.  As we accelerated into the 2nd turn we found ourselves passing several bikes on the next short stretch.  Turn two proved to be surprisingly rough, at least for the speed we had regained.  We held onto it through the bumps thus improving our position further.  We found ourselves safely on the home-stretch when I told Julie through the intercom that it was time to 'hit it!'   We gave it our all hoping to get a draft off of the group of 8 singles that were accelerating shortly ahead of us.

"Where are the other tandems?", I asked Julie.  We both briefly looked in our mirrors but had to focus on the task at hand as they were not readily visible.  Unable to determine where they were and sensing that we sliced some time on the turns and maintained a greater momentum, we  continued to go for the group ahead.

Our momentum and acceleration exiting the turn was greater than anticipated as it carried us well past the group causing us to give up any thoughts of drafting and dragging it out with them at the finish.  "Time to go!", I said.   There was sole single rider a significant distance ahead that we were slowly reeling in but we were unable to get to him before the finish line.  Another single, at some point, was able to grab onto our wheel and slingshot past us at the line putting us in 3rd place overall out of 8600 riders.  And we were the 1st Tandem In!!  ...Finally after all of these years!

Here is a picture of one happy stoker!

No one can predict what next year will bring as they are all different!  This year will certainly be hard to beat!