It was a last minute thing, very last minute. Feeling rather poorly the first part of the week blocked such thoughts of going to hell from surfacing. But Thursday morning my physical well being made a turn for the better to only improve throughout the day. Frankly my riding seems to mostly suck these days and felt the need to see if I was still up to the task. Come Friday morning a plan evolved to dash south to Wichita Falls, TX. It would be a race to the state, a race to the start, the race in and of itself and yet to be known, a race home.

We left late Friday and drove to Lawton OK, I slept maybe 3 hours and we arrived at the www.HH100.org late registration after the 55 minute drive and quick 'snarf it' breakfast at McDonalds. This was the first time ever to register the morning of the event of the 19 or so times, not recommended. I hate it when people say "It is what it is!" - but it fits. Parking proved to be a huge challenge with opportunities closing fast. A brisk walk to the late registration got us there at 5:45AM and we managed to get the tandem together, a challenge in the dark, ridden this year with my "16 going on 17" (like the song she says!) daughter Courtney. At that point I unveiled the new Zipp 808 wheels she had yet to see. The look on her face was priceless!

Courtney's last HHH was on the quad when she was 9 so this was mostly a new adventure. 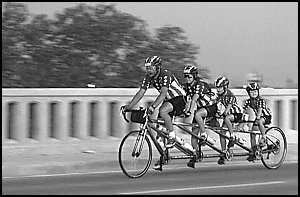 Lathered in Sun Screen. No sun yet!
Check out those Continental Ultra 4000 reflective tires.

Temps were still in the mid 70's so the early part of the ride could only be good. The tandem start was at the front of 13,000+ riders. Being unable to ride backwards to the start line as in years past  forced us to jump in with them when they rolled by. We worried that our remote start likely screwed up our timing chip stats.

Along came the Meridian triplet seen a number of other years ridden with 2 daughters or sometimes with his wife and daughter, the case this year.

The road wandering early bandit starts did not seem to be an issue for the first time in years. The group of 20 tandems that quickly formed worked well together as we headed for the first turn at Iowa Park. Nursing a sore buttocks and then hamstring caused us to hide mostly on the back until fully warmed up some 20 miles into it where our group caught the Official Pace Group. For $275 or more, and another $80 for a jersey you get:

You’ll start first, in front of the crowd. At the finish, you’ll relax in air conditioned comfort at the Finish Line Lounge. Additionally, riders receive a special edition jersey and professional level support throughout the ride. Training plans, training events, and a pre-ride seminar are also included.

Ever wondered what it's like to be a team leader in the Tour de France peloton? This is your opportunity to experience the royal treatment of an Armstrong, Schleck, or Evans!

Join us for our 5th year as we ride a controlled pace to help you break the coveted 5-hour mark. To help you in your quest, you will have a premier starting spot, support vehicles, and a team of experienced coaches and elite racers leading the way - your own personal domestiques!

Please note that this is not a "no drop" ride. We will do everything we can to help you finish in under 5 hours, but ultimately it will be your responsibility to keep up.

In our Tandem Pace Line Passing Part of the Pace Group

Some riders were already getting dropped after only 18 miles!

With the muscle issues mostly behind (no pun intended) we worked past the Pace Group and rolled up to the front finally taking our share of pulls.

Pace Group Escort! We gave him a thumbs up!

'All out' efforts were avoided having not trained that way for some time, read years. The accelerations and small rises dwindled the tandems down to 7 as we enjoyed the strong southerly tailwind working our way towards Electra.

Oh you people of Electra are wonderful! We snagged 2 cold bottles of water on the fly, refreshing. We left the last tandem at the 52 when they pulled into a sag. We pressed on while feeling the insidious effects of the distance, the high average, and the climbing temps. At some point a bull and cow were up close and personal. We hugged the left skirting the situation as best we could.

The chip-seal has been unusually rough for years but enough time and TX heat has smoothed it out considerably. Every now and then Courtney would ask if I wanted a GU. Feeling too tired to deal with it my pat answer was 'No' but then in short order after forcing some rational thought changed it to 'Yes, guess we better'. And I followed with 'Yes' on successive offerings full well knowing the feel of bonk.

The feed zone hill, shortly after Hell's Gate, had a group handing out more water. I grabbed one and Courtney 3! We drank them all during the next 20 minutes and were soon to wish for more.

I warned Courtney as we were leaving Burkburnett that the stretch after the turn south into the wind with a false flat is short but always difficult and not a place to get dropped. Thankfully the trio slowed to something manageable for us as we pushed into the wind towards Hell's Gate.

Although we were ahead of all 13,000+ riders, with 3 'crazy fast' strong dudes that eventually killed us off at the 78 mile point, we found ourselves alone on the road for the first time.

About 70 miles into it before the strong trio left us.

Those strong riders were still in sight when we rode by a long green arrow pointing straight ahead with "100 M" clearly written by it. They rode by it too along with many others to come behind us.

The fateful intersection seemed familiar but it had been 3 years resultant of HHH using a dangerous course in 2012. After that terrible experience 2013 was skipped, the only one since 1993 (aside from '95 and '99 when in France doing PBP). They musta learned that if it 'ain't broke don't fix it', having reverted back to the course adopted in 1995 both last year and this year.

Being out in front did not pay in this case as we found ourselves 6 miles off course when a truck with a trailer and bicycle rack pulled alongside telling us we missed a turn. SAY WHAT? When asked they said it was only a mile or two back. We declined the ride offered and made a U-turn. Arriving at that fateful intersection some 6 miles later we learned that the highway patrol confirmed that the course was marked wrong and that the map was correct. Really? After 33 years of running this event! Out of water and food, and temps having risen 12 degrees in the last hour, we fell into survival mode struggling to a sag. Everything hurt as we had been on the bike 93 miles and thanks to that fateful arrow we now had 20 to go, not 7. Drat, we coulda done it! ....as our plan was foiled of riding straight through attempting to be the first tandem and possibly the first overall bicycle in, accomplished only 2 or 3 other times in nearly 2 decades of doing this mostly insane thing. Courtney's disappointment was evident.
HH100 2008 1ST TANDEM AND 1ST BIKE IN
HH100 2010 1ST TANDEM AND 1ST BIKE IN

It was not to be this year certainly. The Meridian triplet caught us as we got back on course. Hoards of singles and other tandems were now showing up on the road, never mind we were 12 miles ahead of everyone distance wise!

We pulled the triplet some and stopped at the 2nd to last sag at Dean and conversed with them. Courtney took their picture a few times and we'll no doubt send them a copy by email. Generally we would ride straight through non-stop so grabbing some pickle juice was a novelty!

With several miles remaining I kept an eye on the Garmin relating to Courtney that we reached the 100 mile point at 4:50 with a 20.7 average, way down the past hour from going astray. They cut out the forever popular 98 mile Outlaw beer party stop by slightly altering the course. Some good things with character should not end! Our finish was uneventful as we crossed the line having our picture taken, then received our medals. At the end of the day it was 113 miles, a new record for Courtney!

It was way past beer:30. I found a big one, a really big one, while Courtney located some soda and water for us, too. Then it was off to the grassy knoll where I have been hanging out afterwards for a number of years in the breeze filled shade listening to the band. It's a good spot as you can see the finishers celebrating as they walk through seeking a place to rest, eat and drink.... entertaining of sorts as one's well-being slowly returns.

Apparently 3,259 riders with timing chips did the 100 mile distance.

How did we stack up? Courtney had the fastest time in the 15-19 age group despite riding an extra 13 miles!  ...and about 605th place overall. Back out the 13 miles and using our actual 100 mile time of 4:50, she would have been 1st in her group and we both would have been about 40th overall.

Somehow they had me ranked in a 10 year younger group, soon to be corrected. I should be 20th in my group, never mind riding an extra 13 miles and hanging out at a sag. Back out the 13 miles and leaving the sag stop in, I would have been first in my group, too.

Yes, we drove back to Lawton and hung out in a great Mexican restaurant.

The kids love the free sopapillas!

It helps to have another driver on such a long trip, one personally taught. She is a very good one.

We drove home after that and got back at 1:15AM. Yawn.

Courtney's teenage insight and own version to come soon!.