We last ventured to the 'Hilly' two years previous on Courtney's 4th birthday and to this day she retains many fond memories of riding the event with dad on a tandem.  Our plan was to ride a triplet that year but having sold it shortly before we found ourselves on a 2 seat tandem while Julie, aka 'Mighty Mouse,' rode her single.

The timing of the 'Hilly' this year was perfect with Courtney out of school Friday and Monday making it feasible for us to make the trek to IN!  And Natalie, now 3.5, has seemingly been missing out on rides of late and this event provided an opportunity to really make it up to her, hills or no hills.

We were surprised to see such a large number of tandems in and around the RV parking lot campground which was just a hint as to the numbers seen riding longer bikes in the days to come.  It is really amazing that so many tandems tackle such a challenging course. 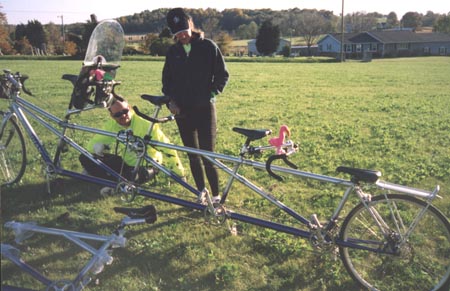 Saturday morning dawned with the temperature in the upper 30's so mom piled on the layers while I installed the windshield for the 'little one'. 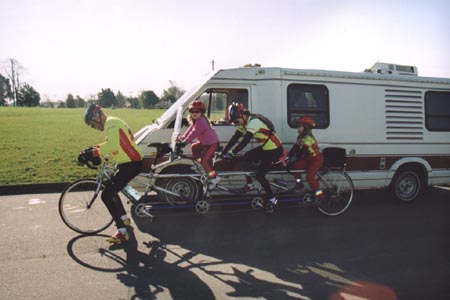 Mounting up and Clipping in

We started rather late at 10AM after the sun had removed some of the morning chill and did not really worry about missing the ride since there were ~5,000 in attendance.  Eleven miles into the ride we found it necessary to shed some clothes as Mr. Sun was doing his job and it was turning into a very pleasant day.

Heading out past the Cemetery

At the 10.5 mile point Natalie announced, "Daddy, I am tired of riding.  I want to go back to the RV."  Hmmmm,  me thinks... time for some child psychology.  The conversation went something like, "But we just got started!  We have a long way to go and many bikes to see and pass.  Look at those riders beating us up the hill!"  Next thing we know Natalie is saying, "Let's pass these guys Julie!  Let's pass them!"  ...and the power would come on.  She was never heard to repeat the request to return to the RV the rest of the day. 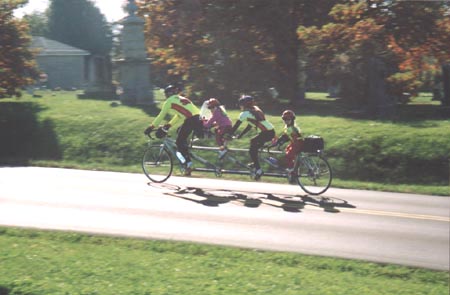 Kids still looking back at Mom!

We climbed steep hill after steep hill and experienced everything this ride is famous for.  We had the pleasure of sailing past many on the downside and even some on the climbs.  And there it was... the dreaded hill we knew had to be out there, you know... the one with 50% of the riders walking, or at least trying to.  Riders were seen to dismount and fall as the percent of grade was not conducive to standing in cleated shoes.  We were half way up and when the captain gave a futile out of the saddle effort in addition to those already straining.  Rather than destroy one's legs on one stinkin' hill... we bailed as I made the announcement through the Tandem-Talk wired to all four riders.  With brakes firmly applied and both Time road shoes planted on the steep slope, Julie dismounted and started to slide down the hill on her Look cleats.  Hmmm.... too steep for a road me thinks!  We managed to get all of the intercom headsets unplugged, everyone unclipped and un-strapped and safely on the side of the road.  Once I was able to get my cleat covers on I had the task of pushing the 70+ pound bike up the hill by myself as Julie's cleats provided barely enough footing for her to scramble up on her own... and I didn't ask the kids for help! 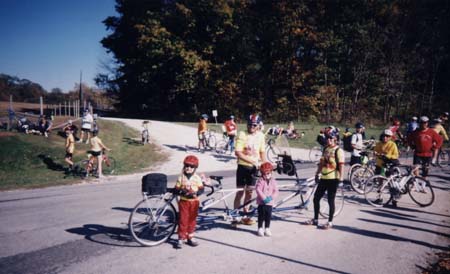 Somewhere on the "Hilly" after walking one of the hills.

We made it to lunch and enjoyed meeting friends and customers with whom we have had dealings over the years.  The rest was well deserved and nicely placed midway through the ride.

The ride thus far was 'so far so good' as we had only one tiny melt down when one of Natalie's all out efforts resulted in a foot coming out of the toe clip.  Julie and I got her calmed down in rather short order and peace was restored.  There was also a small disturbance noted at the lunch stop when the 'little one's' ice cream bar prematurely melted due to an unexpected potty break!  ....ahhhh life's an adventure.

Just as we were heading out a family of four rode in on a Meridian Quad, a tandem which we had the pleasure of riding only two times at the Midwest Tandem Rally before selling it.  It was great meeting the family and finally putting faces with their names.  There is no telling how long we will be on the quint as it is always for sale as a triplet, quad or quint.

Our muscles complained as we were leaving lunch but they did warm up to the task but not necessarily to the immediate task as we were treated to another monster hill in very short order!  We walked our second and last really steep hill of the ride after which we were able to enjoy the warm weather and fall colors.  Pushing the quad up this hill was much easier thanks to two kind souls that alternatively provided power assist! 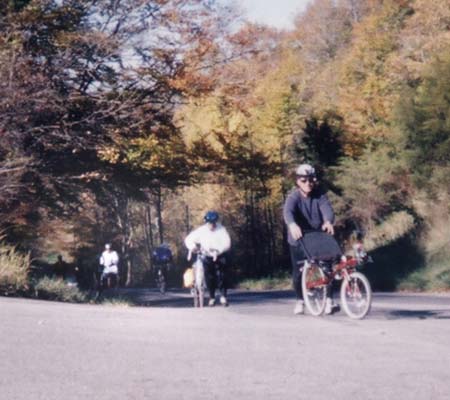 Checking the odometer now and then resulted in mental calculations as to our anticipated arrival.  We were ready at this point to put the day behind us.  We all knew Courtney could go the distance as she had completed both 82 and 92 mile rides earlier this year.  Natalie on the other hand is in that limbo phase, age wise, where all of the elements must line up just right (an eclipse helps now and then too!) including enough rest, good nutrition, entertainment, M&M's, and whatever else I don't recall at the moment. 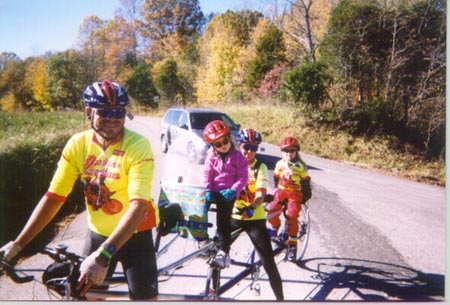 Posing after the monster hill!

Many folks took photos with promises to email them to us... something we always look forward to receiving.

Our legs were quite weary as we worked our way up the relatively small climbs on the road returning to the start area in Elletsville.  Mom left us a note saying she would be right back with some food and she arrived within 5 minutes of our finish as promised. 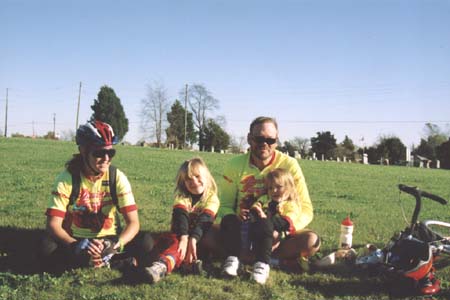 Somewhere we managed to hit 43 mph and no doubt that was with the Avid disc brake briefly applied!  Our riding time was 3:50 with only one stop at the 28 mile point with an average speed of 14.2.  We have found it best to keep rolling and put some miles behind us if everyone is doing fine. 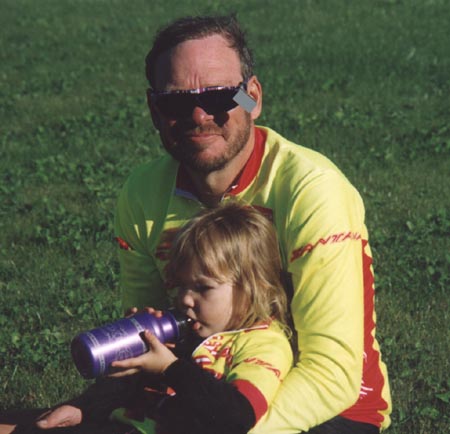 We made plans to meet up with some other tandem folks for the second day.  Jay arrived right on time and we were not quite ready to go but considering the circumstances of the morning we were ahead of schedule!  We headed out in about 5 minutes and were grateful that the three tandem teams had waited for us.

We were immediately greeted with several very short and steep rollers making me comment to my stoker about being thankful we were not on the quad this fine morning!

The rapid descents with somewhat intermittent limited visibility due to trees, shade, sun spots, curves, and the nature of the rolling terrain caused us to use our brakes a bit more than desired.

After surviving the bike traffic and getting ahead enough to where it actually thinned out, we were able to form a four tandem rotating pace line, although it was of short duration at times due to the hills and bike traffic.

It was such a pleasure to ride and rotate with experienced tandem teams, something we always look forward to but finding folks with similar abilities is often a challenge.

We struggled and pushed hard up many of the climbs as the various teams took turns jamming up the hills.  We enjoyed some of the hills that were short enough we were able to actual maintain some momentum and stay off of the granny.  We did use the granny a fair amount though as our legs were complaining from the previous days efforts on the quad.

Our group broke up during and after lunch with one team grabbing some water and heading down the road.  Jay popped a couple of spokes unbeknownst to us and was not seen for the rest of the ride.  We rolled along through the rest of the ride at what was perceived to be a very respectful pace with Marvin and Mary.

We never did catch the yellow Burley that grabbed water at lunch as they were good strong riders.  We probably stood a very good chance of catching them as we were working hard to hang with Marvin and Mary and our combined efforts no doubt raised everyone's average speed.

We were getting quite tired towards the end but did not know it was the end!  Next thing we knew we were riding by the RV parking lot campground!  What a pleasant surprise as mentally we were prepared for another 5 or so miles.

Sunday's ride seemed so much shorter than that of the previous day and it was certainly warmer.  It was actually about 7 miles shorter but we spent a great deal less time on the bike having an 18.2 mph average speed.... thanks again to the strong hammer heads that we were fortunate enough to hang with.

We forgot to take our camera on the second day!