Just a little background before the tale of the Octoginta 2003 begins.....

I've no doubt said it before and will likely say it again, but WOW, what a difference one year makes!  Courtney completed her first local club century (92 mi) on a triplet this spring, something she looked forward to and talked about for months ahead of time.

Her previous distance record at age 4 was 68 miles ridden at the 2002 Southern Tandem Rally in Bay St. Louis, MS.   The background photo was taken near Dayton, OH at the 2003 Midwest Tandem Rally.  We left drought stricken 100+ degree Kansas to go to Dayton and found ourselves in 60-70 degree dampish weather for the weekend.  (More text below the picture)

The rewards of riding with your children are plentiful. If you are considering a setup for your child, Please remember us for sharing our experience with you when it comes time to purchase. The kids and their college funds certainly appreciate you!

The triplet pictured in the background is actually a portion of a coupled quint (5 seater) which provides unparalleled versatility.  At the rally we rode 23 miles to the lunch stop where we removed two sections thus giving mom and 3 year old Natalie a break while "Mighty Mouse" (Julie), Courtney and me treated ourselves to the 'Covered Bridges' loop.  We did return to pick them up!  Here is the 'quint' version! 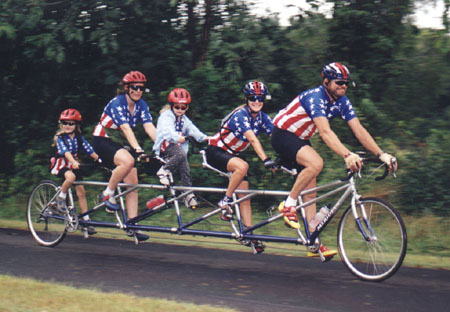 At this age we can count on Courtney to complete about any ride within reason, IF she has had enough sleep and does not become hungry!  ....can you say melt down!  Some coaxing now and then and a bit of reverse psychology does wonders as well.  We will sometimes continue to suggest a short ride and in no time she will inform us that she is NOT going unless it is a long ride, i.e., to the caves and back with a stop at the local Dairy Queen for a total of 27 miles.  There is also the ride to see Mr. Goat  beyond the caves to the town of Linwood.  We sometimes treat ourselves to lunch and take sandwiches to the local school playground.  Did I mention M&M's?  ...a great little bail-out when batteries need to be charged!

Courtney will soon be 6...... VERY hard to believe...... and is now in Kindergarten.  On October 5th, 2003, just 15 days before her 6th birthday she completed the local season 'grand finale' event that has been held in Lawrence, KS for the past 34 years.  The 'Octoginta' fall ride is known for attracting 800 or so riders, its warm minestrone soup and hills.

Rumor had it that the restroom lines were very long as we readied for the ride so we went south to the first convenience store about a half a mile away.... a very good move on our part.  The start was delayed a couple of minutes as the police escort got into position giving us an opportunity to backtrack towards the start.  Approaching the last major intersection now blocked by a patrol car, we were greeted by a police motorcycle and 3 lanes of bicycles coming at us head-on.  We quickly made a U-turn around the police car and told the officer "I think we will go this way!" as I pointed down the road.  He got quite a chuckle out of it. 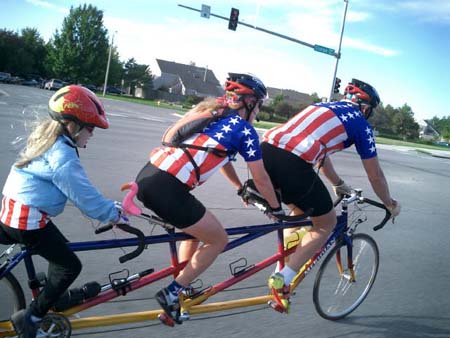 Very early in the ride hammering our brains out  keeping abreast of the local racer pack.

The start temperature was near 60 degrees and since little ones just don't generate much heat we had her bundled her up.  Courtney's jacket and leggings would be shed in about 2 hours as the unseasonably warm predicted high of 78 degrees would arrive.

The ride started off fast... really fast for us!   Heading west out of town we were in very familiar territory as we passed our office building where we had just attended to the grass and landscape the day before.  Stokers Julie ('Mighty Mouse') and Courtney were highly motivated.... oh yeah, me too!

It may or may not have been advantageous to know the road and the three large hills that would soon greet us but never the less we gave it our best shot.  We worked our way to the front of the first racer pack with hopes of coming out on the back at the crest but that goal was not to be had.  One of the problems with riding with racers is that they will often climb hills the same speed or sometimes at a higher speed than they run on level ground.

We chased on the downhill but had difficulty making up much ground as they were fresh and feeling their oats, even with gravity assist.  Our momentum carried us into the next hill providing that false illusion that we were about to catch them but as we decelerated and they accelerated a huge gap opened up.

The second wave of racers, primarily the KCBC team, passed us near the top and we were able to roll past them and get an early start on the next hill.  But once again we found ourselves getting gapped.  Despite losing ground, we held a decent amount of momentum on this climb and hammered the speed up immediately upon cresting the hill.  Going down the hill to the Clinton Lake Dam road, we found ourselves reeling them in.  The cops had the intersection blocked and we used all of the road slicing across it at 25 mph, not missing a beat.  We were on the back!   ...and in the shelter of the pack!  ...unbelievable after so many hills.  No doubt many thought they would never see us again but the best was yet to come.

The second group of racers were now hot after catching the lead group and we answered the call accelerating with them.  Rather than brake and slow down when we caught the tail end of the lead pack, we held our speed and worked our way up to the front to the great surprise of many... ourselves included!  We knew there was a torturous hill coming at the end of the 1.5 mile long dam and managed to position ourselves very near the front of this now huge pack.  As we lost speed going into the hill and hanging out on the center line, they kept marching by... three by three and four by four.  For some reason I could not get the "ants go marching one by one", etc. tune out of my head the rest of the ride!  We were nearly alone at the crest of this gut wrencher with only a few that had been dropped resultant of the climb.

Our efforts on the downhill hill put us with in .1 mile of catching back on but there was no one around strong enough to help chase.   The inexperience of the remaining few quickly showed and we abandoned the thought of working with these folks and struck out on our own.  We managed to roll into the 1st sag at 14 miles with the racers still insight. and with an average speed over 20 mph. Normally we would not stop this early in a ride but this SAG is one to never pass up. 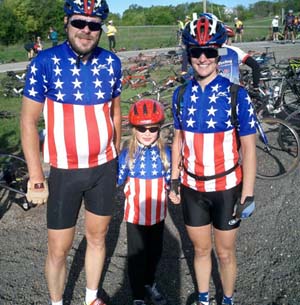 .....and we do mean breakfast as this SAG, operated by Lawrence's Sunflower Bike Shop which is famous for serving up omelets, French toast, OJ, cappuccino, and sometimes champagne ...if you have connections!

Our next stop would be at the 60 mile point.  We left before the racers and rode with different groups until we were once again left behind on this hilly course. 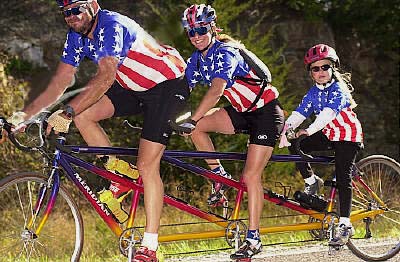 Somewhere around the 27 mile point

It was nice to see so many that we knew and to see them repeatedly.   The racers stopped at a SAG near the 48 mile point and here again we cruised by to have them pass us again some 3 or 4 miles down the road.  The timing was perfect as we were caught at the crest of the final hill of this stretch.  Once again we were able to chat with friends for a couple of miles.

Arriving at the 60 mile point Lunch stop, we found the racers refueling.  This would be the last time for us to cross paths.  Courtney treated herself to the well equipped playground for about 10 minutes before we headed out. 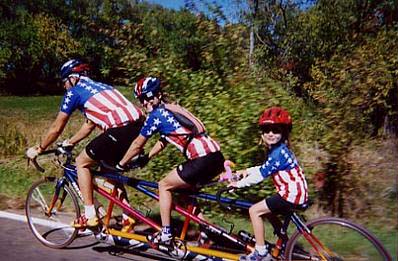 Leaving the lunch stop to burn some of the gained calories!

Local friends caught up as we were leaving the lunch after a luxurious 30 minute stay.  The remaining 20 miles went by quickly at 22-25mph once over the last 5 miles of hills.  The tailwind and being able to draft were certainly welcome.

After lunch... the final run in being towed at high speed by David and Janie on their tandem.

There were times we thought seriously of dropping off as the pace was just killing us!  But then we turned north and lead the way in with more favorable winds riding at a speed more conducive to our waning horsepower.

Some riders joked about being dropped by a 5 year old... all of which kept everyone entertained, especially Courtney!

We completed the 2003 Octoginta in 5.5 hours total time with a riding average speed of 18 mph.  It was certainly a ride for the memory books, especially Courtney's as this was her second longest and by far the hilliest. 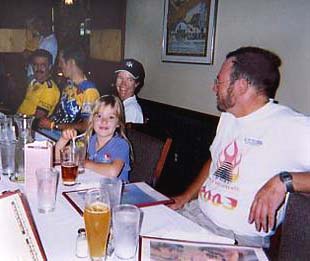 The traditional post ride carbo-load with the local gang!

Courtney is about 28 miles shy of doing 1000 miles this year, low for her.  She has ridden nearly 1500 miles each year for the past two years and 1200 miles when riding on the handlebar and in the infant seat on our triplet when she was 1 year old.

The stories this kid will have to tell!  :-)