The timing could not have been better for us as the Southwest Tandem Rally was held the same weekend in nearby Waco, TX. We were only 104 miles from Austin, Lance's home town, and the location of his growing fund raiser called Ride for the Roses making it oh so convenient, kind of the "kill two birds with one stone" analogy!

An organizer of the event had shared with me some two weeks prior that they expected 5,000 to 6,500 riders this year and 70 tandem teams had already signed up. Needless to say this peaked our interest being on the constant lookout for motivating fun rides.

The ride started northeast of Austin proper and as expected the early morning traffic to the event resembled that of a pace-line, an exhaust filled one at that, and it was very slow moving.

Getting up at 5:45 A.M. and hitting that all nutritious McDonalds drive thru proved to be not a minute too late. We rolled up to the separate tandem start just 5 minutes before the scheduled 8:00A.M. start. We did not need to worry though as the 20 minute delay went by quickly while we were entertained by Robin Williams and heard from such notables as Eric Heiden, Davis Phinney, Connie Carpenter-Phinney, and finally Lance. An announcement was made that the attendance figure for the day was up to 8,000 riders! We knew this was going to be a fun ride! 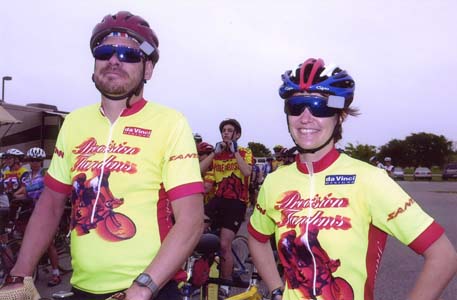 MARK AND JULIE WAITING FOR THE RIDE TO START
NOTICE THE OFFICIAL POSTAL HELMET!

Lance rolled out first behind a stake bed media truck containing a huge publicity crew and all their gear on board. I have seen cattle more comfortable than these guys! Within moments of their departure they reported that Lance's group would get a 6 minute head start before unleashing the now impatient tandem teams. I would estimate there were 100 tandems but there could have been many more in reality.

Off we went in pursuit of fun and adventure, oh yeah... and Lance! I quickly figured out that three or four tandems were on the same conscious or subconscious mission as the slight downhill start followed by a gently rolling four lane highway permitted speeds which rarely dropped below 30 mph. It took all of 13 minutes before we were "Ridin with Lance"! 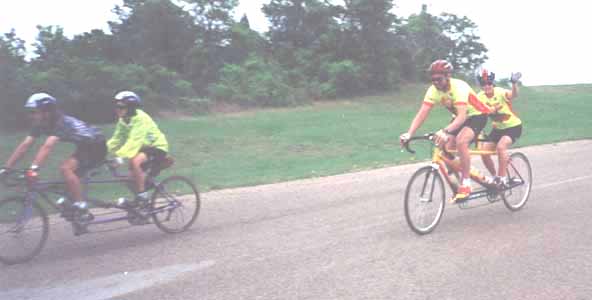 MARK AND JULIE STARTING THE RIDE

The peloton was cruising at a gentle 21.5 - 25 mph pace without wind or major hill interference allowing the first wave of FAST single bikes to fly by in rather short order. After being passed by the 30th or so single, we literally could not let the opportunity pass by. 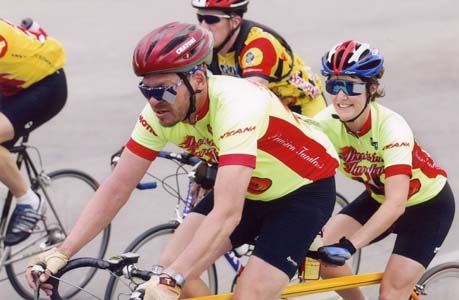 MARK AND JULIE, AKA "MIGHTY MOUSE" RIDIN' WITH LANCE

"Nothing ventured nothing gained" as they say, so we jumped in and hammered with the lead group raising our average speed to an impressive 24.7 mph in short order. We were certainly sucked along both physically and psychologically, really getting into it as it were! The course left the main highway and we were treated to more rural country type roads with a several turns thrown in for excitement as this massive fast pack negotiated everything without so much as slowing. There was certainly a heightened element of danger and it was extremely difficult to maintain contact with the pack while trying to leave a way out should something go awry. 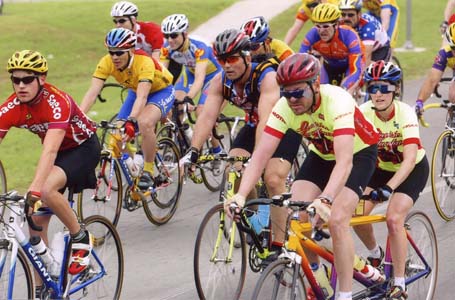 Very early in the ride when everyone was fresh and working hard!

The old racing instincts and mentality were stressed to the max and were essential for us to survive and remain in contact with the group.

We were treated to a bit of adventure and surprise as our pace car inadvertently lead the pack down a small lane that was a dead end! We quickly made a U-turn and found ourselves at the opposite end of the pack thus having to pick our way back towards the front.

The unspoken plan was to hang with these speed demons as long as possible limited by our rather meager nutritional and water on board. Near the 60 mile point a sag was spotted followed by several very short conversations and confirmations that various riders would be stopping. Brakes were jammed on, bikes dropped hurriedly in the grass, and men were seen running to the fence where they relieved themselves followed by a sprint to the tent for water. Cases of bottled water vanished in mere seconds, then another layer was exposed and the scene repeated. I kept finding multiple hands on the same bottle while trying to get my bid in!

A group sprinted out of the sag and others chased on while others were dropped. A second group formed with a repeat scenario while we were mounting up. We chased for about 1 mile and caught the second group and worked with them to rejoin the leaders which certainly took a toll on us.

The roads deteriorated markedly as we were on what I would term half-width country roads complete with pot holes as large as 12 inches! We narrowly dodged a mammoth hole with a quick maneuver and a bit of body shift causing the captain to pause and evaluate the safety or lack thereof as the case may be!

At this point we had two or possibly three other tandems remaining with the group. We rejoined the 70 mile loop which necessitated negotiating slower bike traffic. Thankfully the road width was once again more normal and the pavement much improved.

After pounding a few railroad tracks and negotiating a couple of turns, they ran us right through the middle of what appeared to be a sag causing the group to come to a near halt with major congestion and cross traffic coming from both sides of the road. I recall thinking, "I wonder who planned this one."

Back on the open road a hill of significant proportion loomed on the horizon with only 10 miles to go. Only one tandem seemed to remain at this point in time. The hill was not one that we would "roll" as all speed was scrubbed off before we reached the major part of the climb. The captain's legs rebelled in a big, surprisingly and painful way. The other remaining tandem tackled the hill and were last seen cresting the rise only a short distance off of the back of the pack so we knew they had it made and would get back on. The rapid recovery we experienced once over the top of the hill was a pleasing surprise as we were once again flying along in chase mode at 25-27 mph. Unbelievable! We actually reeled them in about two thirds of the way but after 3 miles we suddenly lost ground as the pack accelerated. 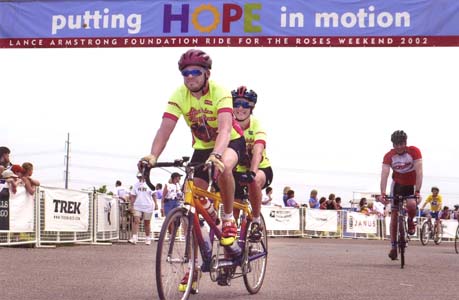 Doing rather well for such a long and fast ride! - thank you! (Thankfully!)

We rejoined the family for the food and post ride festivities including live bands, sandwiches provided by Subway and Fat Tire beer courtesy of the Belgian Brewing Co. 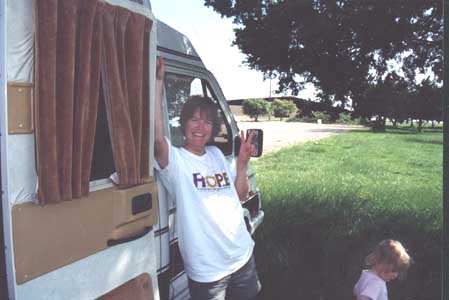 A TIRED JULIE AFTER A 4 HOUR CENTURY!

Surprisingly we ran across several folks from the Kansas City area that made the 740 mile trip! 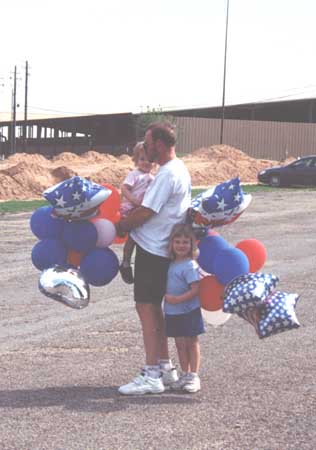 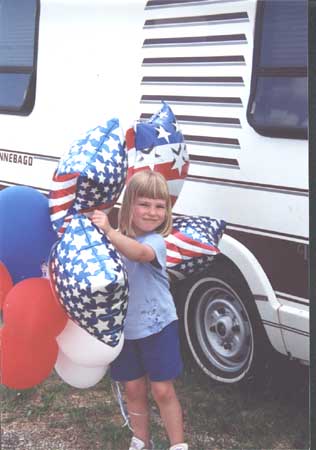 SOME OF MY OTHER STOKERS!

The ride is certainly on our "Must Do" list! Give it a try as you will not be disappointed.